The Watchman, the first Methodist newspaper, was born in the aftermath of the Reform agitation and legislation of the early 1830s. The Wesleyan Methodist leadership was staunchly conservative, led by the autocratic Jabez Bunting, noted as stating that Methodism was as opposed to democracy as it was to sin. The same was far from true of Methodism in general; four of the six 'Tolpuddle martyrs' who attempted to form an early Trade Union in Dorset in 1834 were Methodists, and Methodists elsewhere (especially in northern cities) supported Reformist or radical political activity.

The Watchman has an impressive breadth and depth of reporting of matters of import in 19th Century Great Britain and abroad.

Details of movements of clergy are useful for those trying to track their family history; parliamentary election results are published in detail; discussions of the Second Anglo-Afghan war (1878-80) may give some perspective to modern campaigns. 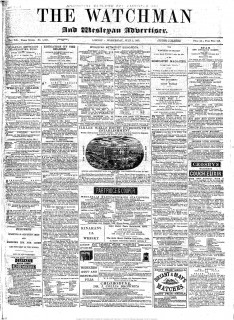 July 1882, the front page of the Watchman contains Methodist notices and ads. Priced at threepence it was expensive at a modern equivalent cost of £8.