Powered by UKPressOnline, the Church Times has launched a complete archive of the paper’s 150-year history.

All of the archive is now available: cataloguing almost every issue from 1863 to the present. UKPressOnline allows you to view, search, and print pages.

The first 26 years, from the paper’s very first issue in 1863 to 1889, saw fierce 'battles' over Ritualism: one of the reasons why the Church Times was established was to defend the High Church against “Broad and Low Bigots”. The paper also warned against the digging of a Channel Tunnel, criticised President Lincoln for going to the theatre (where he was assassinated), and had a stern word for one of its advertisers: “It would be curious to learn how such a cad came to be a priest.”

Unlimited access to the 21st-century archive is free to Church Times postal subscribers. 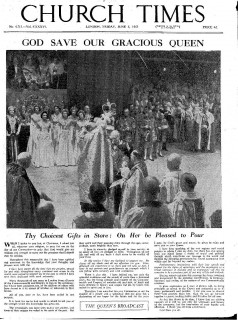